“If anything can, it is memory that will save humanity. For me, hope without memory is like memory without hope.”

“I speak to young people about my life as a Jew in Nazi Germany because they need to understand how such horrors can happen. Only then can they effectively help prevent genocide and promote world peace.”

At this moment, somewhere in the world, someone is persecuted for his or her culture or religion. Innocents suffer. Fear and cruelty persist, even close to home. But so do empathy and courage. 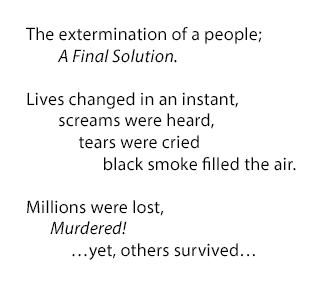 And they would not be silenced.

Even as unspeakable genocide flared across Europe, even before we called it Holocaust, the story lived. It lived at first in whispers and rumor, in a reality that challenged belief. And then, in the end – after far too many long years of horror and loss – the whole world knew.

Their story is our story. Its truth is timeless and potent and essential. In shadow and in light, it shows us what humanity is capable of. And it reveals the terrible price of silence.

The Rhode Island Holocaust Memorial honors the dead and celebrates the living – building a bridge from the past for young people and for all who seek insight, peace, and solace.